I was invited, in stead of my advisor who is on sabbatical, to give a lecture in Mass Communications 10 today about the cameraphone project. Luckily, I didn't have to do it alone: I recruited mroth to help, and we traded off speaking throughout the hour. And we also had slides my advisor had presented a month or two earlier to work from. All things considered, it went well. You can see our slides here (be patient: it's 105 slides in a 5MB pdf file). I'm sure we made a few fans by ending 10 minutes before the class was scheduled to end, too, after 1 hour of lecture and 10 minutes of questions. Afterwards, the professor thanked us several times for a "wonderful lecture," and the two students who I knew from ballroom said that grad students should talk about their research more often. :~) Two other undergrads expressed interest in getting involved with the project. Overall, I was happy with how it went. 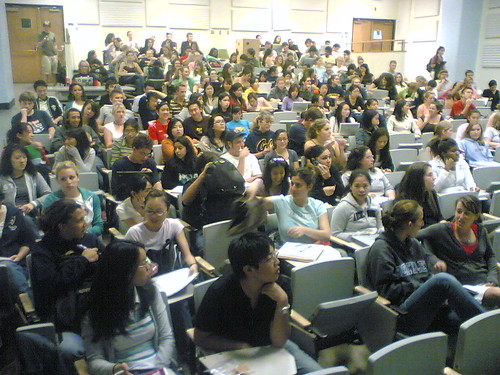 After we finished, I rushed back for the last part of my second identity and storytelling class. I took a gamble signing up for it at the beginning of the semester without knowing anything about it, but so far it has been fabulous. I regretted that I missed most of it today, especially since one of the guest panelists was the creator of Flickr (though the topic was gaming, not photography). I would summarize the class content, but the class blog is doing a better job of that than I could do with limited time. I'm hoping to write about narratives in photo-sharing of various kinds for my paper for this class, perhaps extending it into my social psychology final project on identity and self-representation in photography.

I stayed on for Howard Rheingold's participatory media class, 7-9 on Tuesdays (so late!). I loved the lecture he gave as part of SIMS' Distinguished Lecture Series, but I haven't been as crazy about the course - it seems disorganized and nothing in it has really grabbed my interest. ( Collapse )

On the topic of the cameraphone project, there are plans afoot for three joural publications, and I'll be going with my advisor to 4S next week to see her present the work (and to see a friend and get to know the community). Stress! Excitement! I'm going to have to make this a short update, alas - I have two papers to work on, both due Friday. My dad's website is coming along, though more slowly than I (or he) would like. So much to do! I'll post more later when I have a bit less on my plate.
Collapse