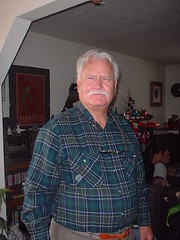 Hyram Ames, 9/23/23-12/03/06
Originally uploaded by morganya.
He introduced me to Poe and to Calvin and Hobbes. When I read "The Raven" I can still hear his voice. We polished opals together in a small rock tumbler when I was young. In high school I helped him weed his iris beds and listened to him tell stories about growing up on a farm, teaching ballroom dance, and hunkering down in Italy in World War II. Though generally reticent, at times he'd wax eloquent about his collections of irises or tropical birds or historical books, or about any number of other things.

Though he has been having health problems for some time, his death came unexpectedly. On the way to the car after the family brunch last Saturday, he became dizzy and fell on his oxygen tank, cracking a rib. The rib pierced his spleen. He had lost half of his blood by the time the helicopter carried him to the hospital. His last few hours were lived for him by a machine, but as he didn't want to be kept alive in that way, he was allowed to pass away Sunday around noon.

He will be missed by his four sons and one daughter, and also by me, his eldest granddaughter, and his other grandchildren. Though it could be difficult to be close to him, I still regret that I drifted even further from him in the last few years, and I feel deeply for my dad, uncles, and aunt, who are really struggling with the loss. I'm glad I was able to see him last week at Thanksgiving, and I'm glad I'll be able to travel from California to join my family and play a piano piece for his funeral, since he enjoyed listening to me play.