Interesting -- I heard on NPR today that Muslim cab drivers (UPDATE: just at the Minneapolis airport) who refuse to give rides to people carrying alcohol (even closed bottles in checked luggage, as from a duty-free shop), citing religious freedom, will have their cab licenses revoked for 30 days the first time and two years the second time. My mind immediately jumped to a parallel issue that has generally enjoyed more favorable treatment in the last couple years: the refusal of some pharmacists (and doctors) to fill (or prescribe) birth control prescriptions, citing religious beliefs. The religious argument in both is the same: those involved believe it's a sin to abet something they believe is sinful. So why the harsh ruling in one case, and permissive treatment of the other? Could it be a prejudice against Muslims in the former case, or perhaps a more tolerant attitude toward alcohol? A prejudice against birth control or women in the latter, or perhaps a more tolerant attitude to homegrown religious extremism (i.e. evangelical Christianity)? What do you think?

I've realized that I could never effectively argue with most anti-choice activists about birth control and abortion because we would be making completely different assumptions about the world -- different and fundamentally incompatible paradigms, in Kuhn's terms (since I've been reading lots of and about him in my philosophy of science class). Their arguments about what the Bible says about sex and other topics hold no weight for me. My arguments about problems of abused and neglected children, overpopulation, and a woman's right to control the course of her life hold little or no weight for them.

The point where we might be able to actually speak to one another, rather than past one another, is the issue of viability and when "life" starts, but even there they take what I see as ridiculously extreme views such as "life starts at conception" or sometimes with the possibility of conception (thus, the fight against birth control as a preventative measure) that I can't possibly agree with, given the messy realities of life: so many fertilized eggs don't implant, so many proto-fetuses don't last even a week, etc.

Furthermore, if they take this stance, why aren't they attacking in-vitro fertilization as vehemently as they are abortion and birth control? Multiple fetuses are grown and then one (or sometimes a few, but certainly not all) is implanted, and the rest are discarded. Isn't that murder in their eyes? Shouldn't all viable fetuses be given the chance to live in that case too? Funny how the intention of the couple seems to change the morality of the fetuses: people who are going through in-vitro fertilization want to be parents while people practicing birth control don't.

Along those same lines, it's also very strange that some anti-choice people take childlessness to be irresponsible, while from an environmental perspective, I think that having children is the more irresponsible choice (which, of course, some eco-minded parents mitigate in various ways, as I hope I would too if/when I have children -- but all things considered, that's still another person using a lifetime's-worth of resources, which is not small even when minimized). And moreover, making sure that one has children at a point in one's life when they can be best provided for seems to be, to me, a lot more responsible than risking having kids as soon as one starts having sex, which for a very large part of the population is very young (even with abstinence-only education like I grew up with, as a recent study shows). Of course, the anti-choice people would say one shouldn't be having sex until one is prepared to have children (which is the often-unsaid corollary to most of their points), but that's a whole 'nother can of worms with its own set of worldview incompatibilities, and I'll save that for another post (though you're welcome to rail in the comments if you want to).

No wonder this is such a hotly-contested debate. Except that it's not really a debate at all.

(NOTE: I don't mean to imply that one side is more "rational" than the other, even though I have made it clear which "side" I am on. These sorts of disagreements happen all the time, in many areas. My main argument is that the incommensurability of worldviews prevent the two sides from even seeing eye-to-eye.)

My garden burst into life over the weekend. What were tiny sprouts on May 2, at the largest, are now vigorous plants four inches high or more. The beans underwent an especially radical transformation. Even last Friday only one was even poking out of the ground, and now they've outstripped the peas. 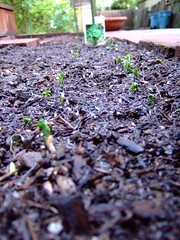 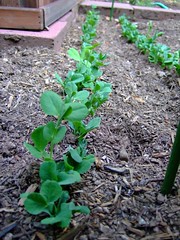 peas, before and after 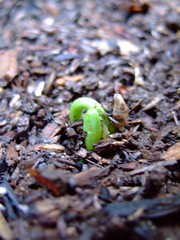 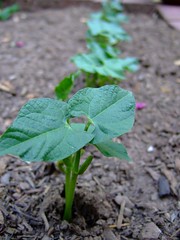 beans, before and after

The parsley hasn't sprouted yet, unfortunately. Also, the oak-leaf lettuce seems to be suffering from some sort of rot, or maybe burn, so I should ask the nursery about what that could be. Might just be the heat. Otherwise, everything's doing very well. I need to add string for the peas to climb on soon.

I added carrots and finally got my zucchini and yellow crookneck squash seeds in last weekend, so I expect them to be springing from the ground sometime next week. I also added some lemon catnip to my mint planter. If all goes well, I'll have a full salad by midsummer! 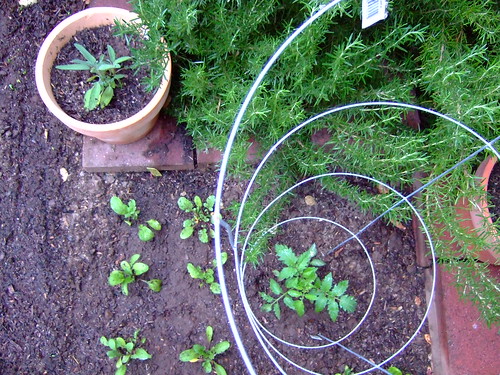