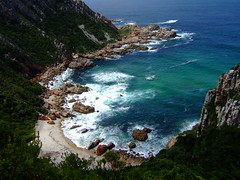 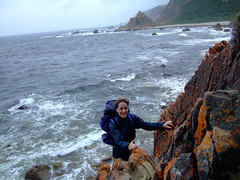 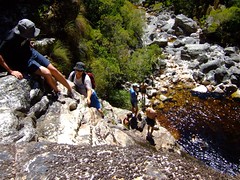 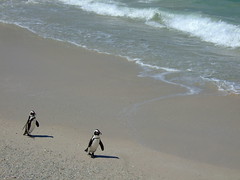 African penguins taking a leisurely stroll
I just got back from two and a half weeks in Cape Town, visiting D's family. While there, we went on some epic hikes. First was the two-day Harkerville Trail that winds through old-growth yellowwoods and stinkwoods to a rugged coast about 300km east of Cape Town. Amazing views, and when they say "strenous" on a trail in South Africa, they actually mean it. The first day was gorgeous but it rained on us the second day, which made the rock-scrambling along the coast a bit more precarious. We hiked about 14km each day, though the few k's each day along the fractalline coast felt like a lot more. We heard a lot of exotic birds, some wild boars, and the barks of baboons, but saw no signs of the elusive Cape Elephant. More pictures on Flickr.

Immediately following this, we spent a full day "kloofing" (bouldering) down a beautiful stream closer to Cape Town, a hike we also did last year. The water is stained a dark red by the fynbos (literally "fine (as in narrow) bush," the characteristic flora of the Cape Town area), and I like to call it iced Rooibos tea. It's taken me some time to get used to the idea of drinking directly out of streams -- though unsafe pretty much anywhere in the U.S. because of cows and people, you can do it quite often from streams in South Africa. My knees and ankles were pretty tired from the other hike, but my arms were most sore after this one after eight hours of rock-scrambling.

After all of this exertion, we didn't feel so guilty taking it (relatively) easy the next week. We visited people and lounged around, and went on a couple short hikes but nothing like the week before. We made our annual visit to the penguins, of course!

It's a bit hard to return from 34 C to 34 F (or thereabouts, anyway), but I'm back and catching up with classes and research.
Collapse